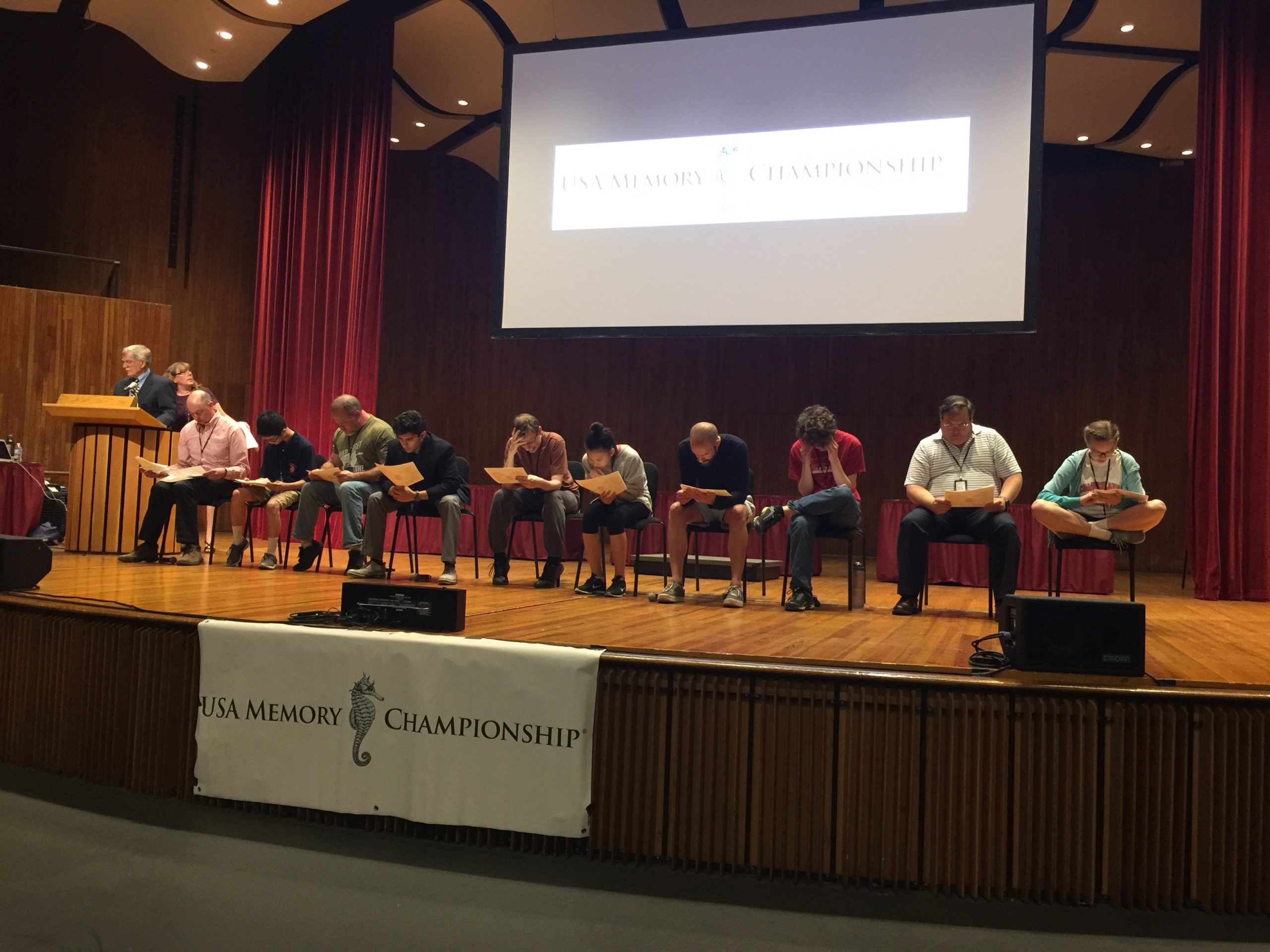 The 20th USA Memory Championship finals were held on Saturday, July 14, 2018 at Kresge Auditorium in Cambridge, Massachusetts, located in the heart of Massachusetts Institute of Technology’s (MIT’s) campus. 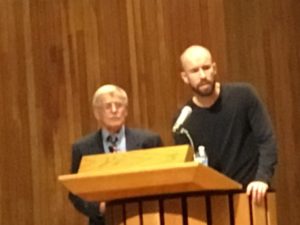 Tony Dottino, USAMC President and Robert Ajemian, MIT neuroscientist and researcher, welcomed the audience to the event. Karen Pinson, the USAMC’s Chief Operating Officer and the official Championship judge, walked the athletes through one final review of the event rules.  After her briefing, the thirteen Mental Athletes left the stage to memorize a list of 300 random words. 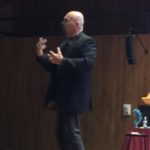 While the MAs were preparing for Words to Remember, long-term memory master Jim Karol dazzled the audience with a presentation displaying his own mnemonic techniques.  Jim is considered by many to have the best long-term memory in the world.  He taught the audience how to use celebrities as memory anchors to remember the order of the original 13 US colonies! 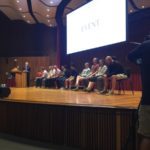 The MAs returned to the stage, and Words to Remember began. The MAs were required to remember the list of 300 words in the correct order.  An MA that incorrectly recalled a word received a strike (X); two strikes and the MA was eliminated.  Play continued until 3 MAs were eliminated.

At the 82nd word, the third MA received their second strike, and the event concluded.  The MAs who were eliminated in that round included Alice Zhu (Richard Montgomery HS), Tamanna Sarowar (Bergen County Academies), and four-time USAMC champion Nelson Dellis.

Nelson’s surprising elimination has to be considered the biggest upset in the 20 year history of the championship.  He is a world-class competitor and the entire room watched in stunned silence as he left the stage. You could see that even his fellow competitors were sorry that he was eliminated so early.

With only one previous champion (Ron White) remaining in the competition, there was a much greater probability that the USAMC would crown a first-time winner!

After the conclusion of Words to Remember, Dr. Marie Kaye spoke about her experience preparing to compete in the 2018 March Qualifying event.  At 70 years old, Marie was the oldest person to ever compete in the USAMC. 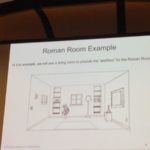 Tony Dottino, USAMC President, presented on the topic of “Fundamentals of Memory Training.”  He taught the audience the Roman Room method and within minutes had the entire audience recalling a sequence of 13 random words they had just seen.  He also showed the audience how to use Mind Maps to help recall a great amount of detail about people they have just met.  He introduced them to Henry, and with the help of a Mind Map the audience was able to recall almost 30 bits of personal information about Henry with only 3 minutes of preparation.  At the end of his presentation, Tony encouraged the audience to remember that memory was a trainable skill, and that with practice they would be able to achieve more things than they ever thought possible.

After Tony concluded, the second event – Tea Party/Three Strikes You’re Out – commenced.  The remaining 10 MAs were introduced to four people who presented over 40 bits of personal information about themselves.  Information ranged from favorite food to current occupation to spouse’s name and wedding anniversary.

After each of the four Tea Party guests introduced themselves to the MAs, each competitor was given a Mind Map containing the information just presented by each guest.  They were allowed 5 minutes to study the Mind Maps, and then the scoring began.

The competition was fierce and it was only after every bit of information was tested for the first two guests that the third competitor was eliminated.  MAs that exited this round included Tracy Miller, Ron White, and Matt Wilson.  Amazingly, one competitor, Tuan Bui from Hershey High School, did not receive a single strike during the event!

After a short break, two fascinating presentations were given by experts of memory. 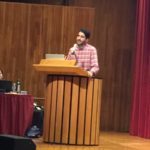 The first presenter, Chris Baldassano of Columbia University, spoke about “Tracking Mental Loci Inside the Brain of a Super Mnemonist“.  Chris introduced long-time mental athlete Paul Mellor, who had agreed to assist Professor Baldassano with his research.  Paul agreed to have an MRI performed while being asked by Chris to recall a random list of words and numbers he had just been given.  The MRI was able to capture the activity in different parts of the brain that were triggered as Paul used the Loci method to recall these data elements.  It was a fascinating presentation and demonstrated how the use of memory systems stimulate brain activity.

The next presenter was Karthik Srinivasan, a post-doctoral researcher at MIT’s McGovern Brain Institute.  Karthik’s topic was “Can Memory Training Ward Off Dementia?”  Karthik walked the audience through research investigating the benefits of memory training in preventing/delaying Alzheimers.  While the research is not conclusive, the research to date indicates that there may a benefit attributable to memory training.  In other words, the answer is a qualified yes! 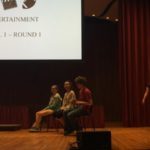 After these two presentations, the USAMC’s newest event debuted, It’s Been A Long Time.  It is the first event in any memory competition in the world to test long-term memory.  One month prior to the competition, MAs were given 350 rows of data from four categories, with each row containing between 4 and 7 unique data elements.  The categories included the periodic table, the Academy Awards, the Rock and Roll Hall of Fame, and the Football Hall of Fame.  Items to be remembered ranged from the boiling point and discoverer/year of discovery for an element to the name, professional team, position and year of induction for each football player.

Questions began at Level 1, where two data elements were asked.  For example, an Academy Awards question could be “What were the best picture and best actress in 1948?”  After each MA was asked one question from that category, another category was chosen.  After each category was queried, the questions increased in difficulty.

Competitors were eliminated at two strikes, and the tension in the room was palpable.  After an incredible number of amazing displays of memory (and many spontaneous bursts of applause from the audience), four MAs were eventually eliminated from the competition (Kyle Matschke, Grace Smith from Cumberland Valley HS, Tuan Bui from Hershey High School, Martin Schneider from MIT). 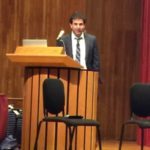 Before the final event, Robert Ajemian (neuroscientist, researcher and professor at MIT’s McGovern Brain Institute) delivered a compelling talk titled “What Does Memory Training Have to do with the Science of Memory?”  Robert debunked many common memory myths, such as the brain stores memories similar to a computer or that technological advances have made possessing a strong memory irrelevant.  He explained how fundamentally different the brain’s storage of memories works from digital storage and showed why the more memories you possess, the easier it is to create new memories (i.e., learn new things).  It was powerful enough that several audience members strongly considered throwing their smartphones away! 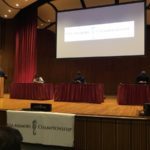 Claire Wang, Avi Chavda, John GrahamThe last competition had arrived, and the three finalists had 5 minutes to memorize the correct order of 2 decks of cards that had been shuffled together (all 3 competitors had their cards in the same order). After their preparation time, the MAs began their recall of cards. Claire was the first MA eliminated, bringing her sensational day to a conclusion. Avi Chavda and John Graham continued to battle, breezing through the first 52 cards. 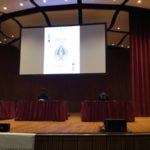 It was at card number 72 that Avi faltered, and John Graham became the champion.  After the conclusion of the event, John asked to present the remaining 32 cards in the double deck, which he did flawlessly.  Only two other champions had previously performed that feat (Nelson Dellis, Alex Mullen). 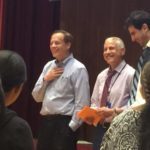 Dr. Bob Desimone, the Director of the McGovern Brain Institute congratulated John on his impressive accomplishment. 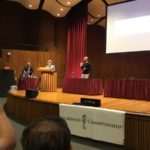 Chester Santos, the International Man of Memory, handed John a prize check of $2,000. 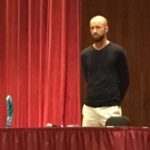 John shared that he is going to be married in 12 days, and was so focused on becoming champion that he planned his wedding date to accommodate his preparation for the event!

Thank you to everyone who participated – competitors, volunteers, organizers, spectators.  You made this our most exciting championship event ever!

Orlando, Florida: The USA Memory Championship is celebrating its 20th anniversary by announcing a partnership with MIT McGovern Institute for Brain Research. This year’s USA Memory Championship finals will be held on July 14, 2018, at 1 pm at the Kresge Auditorium, MIT. Tony Dottino, the founder, has entered into a rare collaboration with MIT… 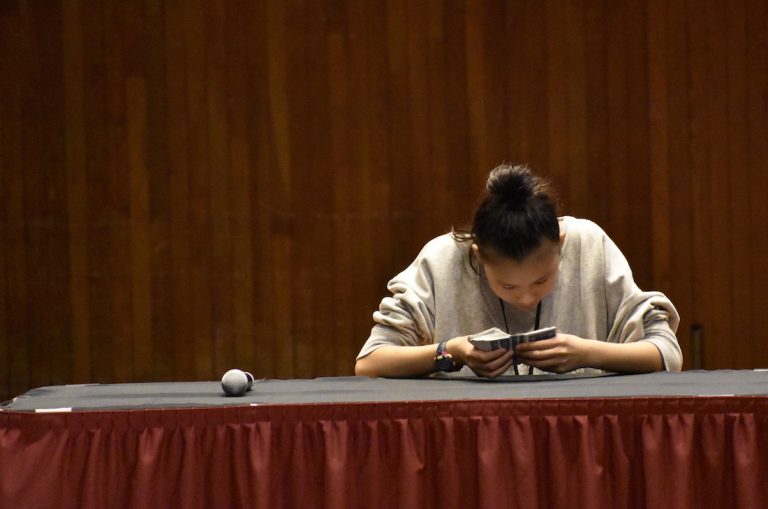 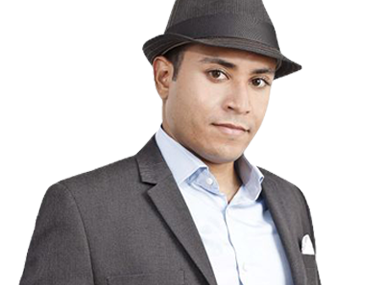 Former 2008 USA Memory Champion Chester Santos, known as the International Man of Memory, has agreed to become a sponsor for this year’s championship.  Chester will present a cash prize to the winner of this year’s competition.